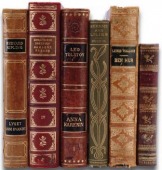 While everyone's familiar with the Harry Potter and Twilight series, I've found a few others that you might find interesting.

The links take you to summaries of the first books in the series.

Some books are not part of a series, but still interesting.

LOIS LANE SERIES by Gwenda Bond
Similar to Veronica Mars (a show you should watch, too) where a smart, strong female student investigates mysteries that have baffled the adults who seem to prefer brushing them under the rug and moving on. There's more to Metropolis than what it shows on the surface. A modernized look at the Superman world through the eyes of their teenage selves.


THE BLACKTHORN KEY SERIES by Kevin Sands
Following a series of murders, an apothecary’s apprentice must solve puzzles and decipher codes in pursuit of a secret that could destroy the world in this suspenseful debut novel.
“Tell no one what I’ve given you.”
Until he got that cryptic warning, Christopher Rowe was happy, learning how to solve complex codes and puzzles and creating powerful medicines, potions, and weapons as an apprentice to Master Benedict Blackthorn—with maybe an explosion or two along the way.
But when a mysterious cult begins to prey on London’s apothecaries, the trail of murders grows closer and closer to Blackthorn’s shop. With time running out, Christopher must use every skill he’s learned to discover the key to a terrible secret with the power to tear the world apart.

THE 5TH WAVE SERIES by Rick Yancey
The human race stands on the brink of extinction as a series of alien attacks decimate the planet, causing earthquakes, tsunamis and disease. Separated from her family, Ohio teenager Cassie Sullivan will do whatever it takes to reunite with her brother Sam. Fate leads her to form an alliance with Evan Walker, a mysterious young man who may be her last hope. Forced to trust each other, Cassie and Evan fight for survival during the fifth assault from the invaders.

MONUMENT 14 SERIES by Emmy Laybourne
--A group of kids stuck in a post-apocalyptic world.

SINGULAR MENACE SERIES by John Sandford
"This series launch draws you in with its arresting tale about Odin and Shay Remby, a pair of foster kids who become the prey of a ruthless medical research corporation. With its fast-breaking turns, Uncaged functions well either as a standalone or as the promise of other pulsing things to come."


ASYLUM SERIES by Madeleine Roux
--What if your new high school used to be an asylum for the insane where weird experiments took place?  What if the residents still haunted the building?  What if you had a personal connection to the mystery behind this place and your arrival wasn't an accident?

SEA OF SHADOWS by Kelley Armstrong
--Fans of Armstrong's horror novels won't be disappointed.  While this is a fantasy series (this being book #1), she brings in some of her horror talents.  Instead of vampires and witches, this series deals with healers, seers, men with swords, and other creatures of the fantasy realm.

PROXY by Alex London
--A story that really questions what it means to be human.  This novel is best described as a futuristic version of The Whipping Boy.

THE EYE OF MINDS by James Dashner
--Many will recognize the author from his best selling Maze Runner series.  This new book takes us into a different type of maze, one that is the descendant of the internet.  Similar to Ready Player One, this book creates a virtual world where most people spend their time being and doing whatever they want.  But one gamer has turned himself into a villain so powerful that he could bring about the end of the VirtNet.  Three teenage hackers are all that stand between him and the destruction of their virtual world.

THE GATEKEEPERS SERIES by Anthony Horowitz
--Matt knew when he came to Lesser Malling something was wrong about the place.  If only he knew how right he was.  As the book advertises: "Five children saved the world.  Five children will save it again.  Matt is the first."


THE MORTAL INSTRUMENTS SERIES by Cassandra Clare
--Delves into the realm of the supernatural with a main character often compared to Buffy.  Smart, sharp writing with an interesting story and world for those interested in this type of genre.

DON'T TURN AROUND by Michelle Gagnon
--Teenage hackers accidentally stumbled upon information they shouldn't.  Now there are people after them and they must figure out their next move.


ALEX VAN HELSING SERIES by Jason Henderson
--If you're familiar with the title character's last name, you know where this is going.


CHESS TEAM SERIES by Jeremy Robinson (link takes you to his website)
--A special forces team with chess piece code names takes on a world of espionage, terrorists, and mythological creatures modern man only reads about in stories.   This is an adult series, but for those who enjoy seeing myths and the supernatural ground in realistic science, this is a fun series.


DANIEL X SERIES by James Patterson
--A teenager uses his powers to hunt down the alien who killed his parents.  Along the way, he discovers new allies and enemies he must kill along the way.  A quick series with short chapters (a James Patterson trademark).


WITCH AND WIZARD SERIES by James Patterson
--Set in a dystopian future where magic is outlawed, two siblings imprisoned for unknowingly possessing magical powers, must free themselves and stop this totalitarian government from eliminating those of magical tendencies.

MICHAEL VEY SERIES by Richard Paul Evans
--Follows the adventures of a teen who has the ability to pulse or surge electricity out of the palms of his hands. He must decide who is on his side and who is trying to kill him as he grows into his powers.

HELL ISLAND by Matthew Reilly
--For the reluctant reader who likes short books and military action.  If you like this one, there are others by this same author, albeit longer, but just as good.

THE MAZE RUNNER SERIES by James Dashner
--By now, everyone knows this series.

DIVERGENT by Veronica Roth
--More fun with dystopian literature. Also, by now, everyone knows what this is about.


JANE SLAYRE by Charlotte Bronte/Sherri Browning Erwin
--For those who enjoyed Jane Eyre, this takes the darkness, the evil, and the "vampire" elements and turns them into real beasts for Jane to slay.


THIRTEEN DAYS TO MIDNIGHT by Patrick Carman
--In this nail-biting novel of mystery and dark intrigue, Jacob must walk the razor thin line between right and wrong, good and evil, and life and death. And time is running out. Because the Grim Reaper doesn't disappear. . . . He catches up.

THE RECKLESS SERIES by Cornelia Funke
--For years, Jacob Reckless has enjoyed the Mirrorworld's secrets and treasures. Not anymore. His younger brother has followed him. Now dark magic will turn the boy to beast, break the heart of the girl he loves, and destroy everything Jacob holds most dear... unless he can find a way to stop it.

THE DARKEST POWERS SERIES by Kelley Armstrong
--Book One: The Summoning: Chloe Saunders is locked up in Lyle House, a "special home" for troubled teens. Yet the home isn't what it seems. There is definitely more to Chloe's housemates than meets the eye. The question is, whose side are they on? It's up to her to figure out the dangerous secrets behind Lyle House . . . before its skeletons come back to haunt her.

THE DREAMHOUSE KINGS SERIES by Robert Liparulo
---Book One: When the Kings move from L.A. to a secluded small town, fifteen-year-old Xander is beyond disappointed. He and his friends loved to create amateur films . . . but the tiny town of Pinedale is the last place a movie buff and future filmmaker wants to land.

But he, David, and Toria are captivated by the many rooms in the old Victorian fixer-upper they moved into--as well as the heavy woods surrounding the house.

They soon discover there's something odd about the house. Sounds come from the wrong directions. Prints of giant, bare feet appear in the dust. And when David tries to hide in the linen closet, he winds up in locker 119 at his new school.

Then the really weird stuff kicks in: they find a hidden hallway with portals leading off to far-off places--in long-ago times. Xander is starting to wonder if this kind of travel is a teen's dream come true . . . or his worst nightmare.


THE KING RAVEN TRILOGY by Stephen Lawhead
--This acclaimed trilogy (Hood, Scarlet, Tuck) conjures up an ancient past and holds a mirror to contemporary realities. Prepare yourself for an epic tale that dares to shatter everything you thought you knew about Robin Hood.

DRACULA: THE UN-DEAD by Dacre Stoker
--Sequel to the original classic written by Bram Stoker's descendent.  For those who read Dracula for the extra credit, this should be an interesting follow-up.

THE GONE SERIES by Michael Grant
Gone series by Michael Grant is a fictional series focused on fictional American town where its inhabitants developing supernatural powers. Also, anyone over a certain age disappears leaving only the kids in this dome covered area.


MAXIMUM RIDE SERIES by James Patterson  ((Soon to be a major motion picture))
--Genetically modified kids and their quest to figure out what happened, find a place they belong, and survive those who want to kill them.

QUANTUM PROPHECY SERIES by Michael Carroll
--If you like stories about superheroes, one where regular people one day find they have super powers, then this is the series for you.

THE VEIL SERIES by Christopher Golden
--In this enthralling new tale from bestselling author Christopher Golden, one man is drawn into a realm just across the veil from our own, where every captivating myth and fairy tale is true, the vanished exist–and every fear is founded….


THE PHYSICK BOOK OF DELIVERANCE DANE by Katherine Howe
--Salem, Massachusetts, 1681. Fear and suspicion lead a small town to unspeakable acts. Marblehead, Massachusetts, 1991. A young woman is about to discover that she is tied to Salem in ways she never imagined.